Dream Dogos is proud to present to you, some of our breeding stock.

A Companion, a protector, a hunter and he does every single task superbly, you will certainly call him the Dream Dog.

Dogo Argentino or Argentine Mastiffs as this breed is also known, is characterized as a noble companion, a fearless protector, and an excellent big game hunting dog. As a hunter, this is the closest you will ever get to hunting with lions. While pheasant hunting with a friend, his comments reflected this exactly as he could not help himself from saying, “I feel I am hunting with lions.” I have watched my two dogos working harmoniously together as a pack. They begin by smelling up the air to detect the area where the pheasant is. Then they hunt as a pack one is tracking it in the middle of the corn field and the other is blocking its exit leaving it no choice but to flush.

Lihuen De Las Pampas is a fine example of the Dogo Argentino. She is after very careful research, my foundation Dam. “Dogo Argentino Breeders” as commented by Dr Raul Zeballos, (a Dogo Argentino expert and the man responsible for the introduction of the Dogo Argentino Breed to the United States ), will kill for the honor of having her. This comment was inspired by the fact when you look at her the only thing that comes to mind is the description of the Dogo Argentino by Dr Antonio Nores Martinez the creator of the breed “Harmonically beautiful, within the physical parameters required to perform its duty”. Lihuen is a superb athlete, when in motion, is a larger than life combination of barely contained explosive power and lightening speed, coupled with tremendous stamina and unbelievable agility. At a walk, she moves like a lion; with power, dignity and the supreme confidence that she is queen of all she surveys.

Lihuen, my female Dogo Argentino is proud, yet gentle and conscious of her power which makes her extremely reliable and self confident. She has a distinctive feminine look, striking appearance, friendly disposition and gallant behavior that commands respect and has earned her the name “Lihuen or First Lady”.

The Sire Huinca Las Pampas, A true representative of El Dogo Argentino and the breed standard as set by Dr Antonio Nores Martinez. He is a real powerhouse, fireball and as described by Dr Antonio Nores Martinez has incredible determination and legendary courage. He has endless amount of energy and is very jovial. I have had him with me during the breeding and he was a joy to have and I never wanted to let him go. He is extremely friendly and outgoing. 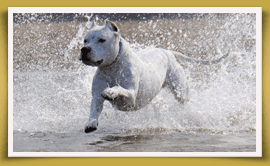 Batra is the new star female Dogo Argentino added to the Dream Dogo family. Let the pictures speak for themselves. 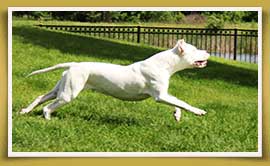 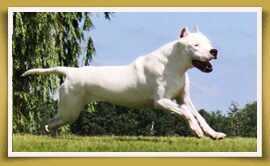 Cancerbero is the newly added male to the Dream Dogos lineup of top-quality Dogo Argentinos. Cancerbero stands for "Dog Demon from Hell." 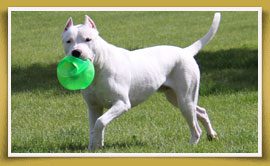 Lagarto is one of our newly added top-quality male Dogo Argentinos.